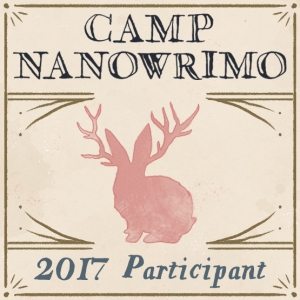 Check out these links for an explanation of what Camp NaNo is and what I’m doing.

Today, we’re staying in the modern world with Bellamy and Clarke. They’re a little out of their element, but what better way to get them started than to throw them together in a situation neither wants to be in?

See, the real world can be just as complicated as the apocalypse, except without all of the bloodshed (hopefully). For Clarke that means juggling school, work, her mother’s expectations, and her personal life. Abby only wants what’s best for Clarke, but what Abby thinks is best, isn’t always what Clarke thinks is best.

That’s why Clarke has been so reluctant to go on this couple’s retreat thing with her mom and Kane. She somehow she got talked into it, and she regrets it even more when she finds out her boyfriend, Finn, has been cheating on her. Now she’s stuck explaining to her mom that her life is a mess. Not something she looks forward to. There’s also the issue of the very expensive tickets that have already been paid for.

So, Clarke decides to give them to her friend Octavia and her boyfriend, Lincoln. They could use a vacation, and if anyone would enjoy a couple’s retreat, it would be those two. And she figures the dinner party Octavia is throwing will be the perfect time to spring her plan on them.

Too bad, Octavia’s annoying older brother is in town, sticking his noise right where it doesn’t belong. She’s never really cared for Bellamy. He’s arrogant and sarcastic and pushes her buttons (yeah, I stole that line from yesterday). If he calls her, “princess,” one more time she may strangle him with her purse strap.

But, she’s determined to not let him ruin the night or her offer to Octavia and Lincoln. Her plans unfortunately unravel when Lincoln can’t take time off of work. Octavia has the perfect solution, though: she can just go with Bellamy.

Yeah, the set-up is pretty cliche, but I was in the mood to write a popular trope, and this was the first one to spring to mind when I saw the prompt. Forcing Bellamy and Clarke to spend time together when they can’t stand each other is always fun. More to come from what is shaping up to be yet another novella.

There’s another knock–this one louder–on the door just as he gets there.

He peers through the peephole then groans, his forehead hitting the door. Figures. He throws open the door, but doesn’t move out of the way. “Hey, Princess, what an unexpected surprise.”

Clarke blinks at him, obviously surprised. Apparently Octavia didn’t warn her either.

“What are you doing here?” she asks.

He leans against the door frame. “What are you doing here?”

She narrows her eyes. “I asked you first.”

“Yeah, but I decided not to answer.” He laughs at the scowl on her face. This is how pretty much every conversation goes with Clarke. There’s something about her that brings out his inner child.