The 100 fic: A Hero Without a Sunset to Ride Into 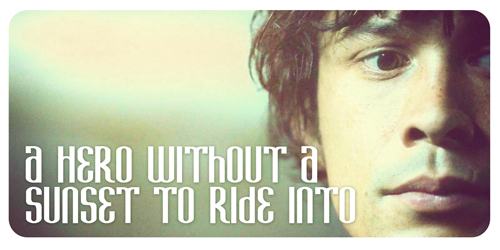 The war may be over, but the battles never end. Bellamy contemplates the consequences of war. Post-season 2 finale.
608 words | [PG-13]

The history books never tell you that the end of the war is just the beginning. It’s the start of cleaning up. Of healing wounds. Of returning to life. Or starting a new one.

Now that the war is over, Bellamy’s finding this part to be the hardest. As far as he can tell, they won, but it doesn’t feel like a victory. He’s exhausted—physically and emotionally. He feels like he’s been torn apart and stitched back together, but the seams don’t quite match up. His world has tilted into something unrecognizable. The color drained, sounds muffled. He wades through pain and swims in a fog so thick he can’t breathe without drowning.

He’s killed more people than he cares to count. His hands aren’t just covered in blood, he’s bathed in it. He hates the things he’s done. Hates the things he’s seen. He hates himself and the world and God if there is one. The war may be over, but the echoed screams of a murdered generation haunt his dreams. They wrench him from restless sleep—sweat-soaked and tear-stained. Only there’s no escape this time because he’s the monster in this nightmare.

Bellamy settles at a table in the mess hall but has neither strength nor motivation to eat. He stares blindly at the food, pushing it around on his plate. He thinks it might be pot roast. The mess is filled with people just like him—adrift in a stupor of heartache and misery. Personal hells of their own making. He’s never been more alone than in this crowded room.

This is the part they forget to tell you—that you don’t just mourn the dead. You mourn what used to be and what could have been. You mourn the spark of life that has fizzled out inside of you. You mourn the innocence you can never get back.

War is a one-way street—no U-turns allowed. Or maybe it’s like a raging river, tossing you in rapids until you are bruised and battered against the rocks only to throw you over the precipice of a waterfall that has no end yet you drown in it all the same.

The panic wells up out of nowhere. Bellamy’s world tilts a little more. He grips the table to ground himself and manages to breathe through the terror without anyone noticing. They’re all far too consumed by their own nightmares to notice his screams anyway.

Peace comes with a price. Surprise!—you fought for a future you no longer deserve. The blood on the fields will dry. The dead can be buried. Wounds heal and the sun rises, but a shattered soul can never be made whole. In his head and in his heart, Bellamy knows he’s broken—a fractured reflection of himself. His sins require absolution he cannot give.

So he eats with his friends and laughs at their jokes. He breathes in and out. In the mornings, he goes to work, and every night the Devil returns to chase him to the brink of his sanity. He’s afraid one day he might jump. It would be a lot easier.

Because the books don’t tell you how to make peace with your demons.

They don’t tell you how to start over again.

They don’t tell you it’s the beginning of the end.