Archive for the tag “recap”

Day 31 of Isolation: A Month in Review

I can say, without a doubt, this has been the strangest month of my life. Never would I have thought that my natural tendencies to isolate thanks to social anxiety and being an introvert would actually come in handy someday. But here we are, and I’m living it up, lol. No more pressure to go out and do things and being forced to interact with people because being social is the acceptable format of life.

On the other hand, I’m isolated with six other people, and it’s starting to weigh on me. It’s noisy and chaotic, and I thought I was done with this kind of pandemonium when my kids became teens and were no longer around all of the time. Now they’re (almost) all home all of the time.

Anyway, we’ve been isolating for a month now. The kids haven’t been in school since March 13. That was also the last time I was at a store or went anywhere besides walking around the neighborhood. I waited in line to check out for almost an hour that day and managed to snag one of the last packages of toilet paper (which we are currently coming to end with right now–this was back up for when our regular supply ran out but we managed to make it last longer than I expected).

Since then, I’ve driven to that store twice, but didn’t go inside. Otherwise, I’ve been at home. I’ve walked around the neighborhood on four different days, never getting more than a few blocks from our house.

My 9yo with Eevee on the trail a couple weeks ago.

I painted rocks with the kids which is something I haven’t done in years because I haven’t had the energy, but with nothing else to do, managed to drag out the paints and harvest some rocks from the landscaping.

Those rocks were hidden around the neighborhood on our walks. It’s a little extra motivation to actually get out. Not sure if any have been found. They were all still there last time I checked (on Easter). 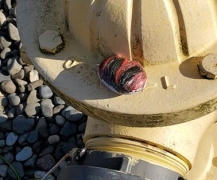 I did find two, including this one which made my day. I absolutely love finding rocks painted by little hands. They are the best rocks. This and its sibling joined our collection we’ve had going for four years. Not sure if I’ll ever release it back into the wild. Sometimes we do, but some of them we’ve kept because we love them so much.

I’ve spent a lot of time working on other craft projects because I have nothing else to do with my time. I’ve crocheted a bunch of washcloths out of scrap cotton  yarn in case we run out of paper towels. I’ve made baby blankets and keep adding to a throw blanket I’m making for myself (that won’t be finished any time soon because I’m nearly out of yarn and craft stores are closed). 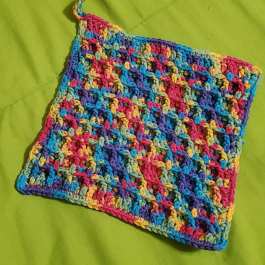 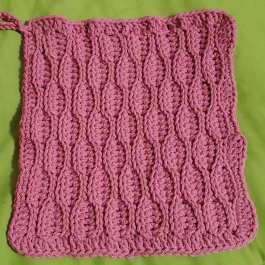 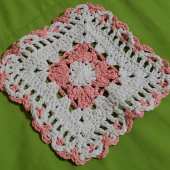 And since I am running so low on yarn and officials are now recommending everyone cover their faces in public, I broke out the sewing machine and my old quilting supplies to make masks for the family.

We’ve celebrated a birthday and Easter stuck in this house together. I filled out the census and helped my 19yo shave off all of her hair to cope with her anxiety and also got part of my Girl Genius Kickstarter I helped fund (my first and only Kickstarter so far). I can’t wait for the rest of it to arrive.

And now my grandson is starting to walk! Of course, every time we’ve tried to get video or pictures of it, he sits down. He took his first official steps on Easter. Now he occasionally walks four or five steps across the room before he realizes what he’s doing and stops. He turned ten-months on the 7th. My daughter asked how long before he’s actually walking, and I told her by the end of the week probably. We’re going to be in so much trouble.

Other than that, I’ve kept busy with cooking dinner most nights (often making up new recipes as I go with what we have on hand), watching Netflix (got through Lost in Space and Another Life), and now playing board games online since I can never seem to coordinate with the kids to play actual board games with them.

Of course, not everything has been great. We’re still under a lot of stress and worry about the virus and money. Right now my husband is still working. So we have money for food (unlike some people), but with a constant worry of him bringing this home every day he works. And with my health, that could be very bad. I haven’t been sleeping well because of chronic insomnia and anxiety (which I’m out of medication for).

The kids officially started digital schooling last week as the buildings are closed for the rest of the year now which is another headache added to my life. It’s necessary, but there’s a reason I didn’t homeschool my kids. I just don’t have the energy for all of this.

The past month has been completely strange, and yet, oddly the same as always for us. And it’s just the first month. I’m sure the next month will be more of the same dichotomy of strange but the same. The kids aren’t going back to school. Graduations (I have a senior and an 8th grader) are up in the air. Summer might be spent in isolation and even I’m starting to go stir crazy.

At This Rate You Will Finish: ??

So Camp is finally over. I didn’t win. I didn’t really think I would, but I’m satisfied with how much I did get done although I probably could have gotten more if I’d put a little more effort in. Or played a lot less Sims.

But every NaNo event teaches me new things about writing and my limits. I’m currently learning to live with this chronic fatigue that eats all the energy I have physically and mentally. I can no longer expect 5k days and 50k months. I just can’t do it. My best day for April was the 27th when I wrote over 2,500 for the story. I did nearly 3k total for the 12th but half of that was rambling blog posts.

The worst part of the whole thing is I didn’t quite catch up with my sentences. I’m still six days behind so I can’t really let up yet. I’m so close I can taste it, though.

With a laugh, Gil patted Tarvek’s cheek as he headed towards the door. “I beat you oncce already.” Tarvek shoved him hard in the back, but Gil was expecting it, easily hopping with the momentum and staying on his feet. “See you in the morning, Sturmvoraus–I have a party to get back to that I was very much invited to.”

He waggled his fingers over his shoulder and slammed the oor seconds before something hit it with a dull thwump then fell to the floor.

“You owe me new trousers,” Tarvek shouted from the closed lab.

At the center was a long workbench covered in a microscope, beakers, and about a dozen little bottles. And one familiar feathered dart.

He picked it up, anger flaring along with a phantom pain in his neck. He spun, looking for Tarvek, just in time to get a ball of fabric to the face that nearly knocked him off his feet with the force it hit him.

“Yes, besides that,” he said flatly even as he slid out of his jacket and brocade waistcoat. The smirk that curled her lips made him pause.

“Those flowers drawn on your butt are probably going to get more than a few laughs,” she said, not even bothering to hold back her own giggles.

“What!” He twisted around to see the back of his trousers–sure enough, a floral pattern covered most of the seat. It looked suspiciously like the design on the chairs in the summit room.

“You tell me how I can get my hands on one of these,” he sad, pointing at the coil until the tendrils of extended to his fingertips.

Anevka giggled–an absolutely brilliant sound on all accounts. “You’ll have to talk to Nikola. Father hired him from Paris to upgrade the electrical wiring in the castle while they were tearing things up for the new heating system. When he heard about the party, he said he had something that would steal the show.”

She looked up at the lightning that seemed to almost move in time to the music.

Heavy booted feet stomped down the hall as Gil’s gaze landed on some barrels just inside the room. He used all his strength to swing one around tipping it on its side as he did.

Gil wedged himself between a sturdy storage rack and the barrel and waited while Theo stood in the shadows next to the still-open door. As soon as the guards appeared, Gil kicked the barrel as hard as he could, sending it tumbling into the unsuspecting men.

“Go,” he yelled, dashing forward and hurdling both the guards and barrel.

“Stuff it, both of you,” Celeste hissed then shoved them towards the patio where a window sat slightly ajar.

They crawled behind the guards’ backs as they argued and discussed the broken door then one-by-one, lept out the window and scurried through the potted plants and mostly leafless trees.

Back inside the castle, Celeste guided them out of the sitting room. “This way.”

“Shh,” Celeste hissed, ducking further behind the sofa and squishing Zulenna into Gil who fell against Theo.

“I can’t figure out his angle. Seventy-five percent of politics is tedium and the rest is schmoozing, and you can’t handle either. All of your fumbling around just looks bad on him and the Empire so why you?

“My only conclusions are he picked your name from a hat and is unfortunately stuck with you or he’s completely lost his mind.”