Archive for the tag “weather”

When did I move to Arizona?

This is the forecast for Washougal, Wa next week.

Welcome to the Pacific Northwest where it rains nine months out of the year, and there’s a chance of Hell in the summer.

Thankfully, we have air conditioning this year. The last six years, we lived in a house with no AC. I don’t even want to think about what that would be like on Thursday. 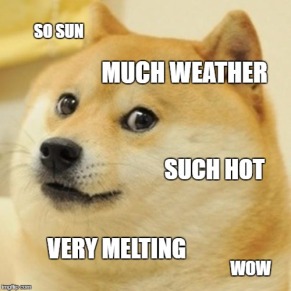 What’s with the weather, Washington state?

The kids are getting ready for school and trying to decide which hoodies/jackets to wear.  It’s raining (when isn’t it) but it’s 53F out.  And it’s not even 8am yet.  In November!  I guess it’s supposed to be up to 55F today and that’s how the weather’s going to be all week.  That’s weird for even here.

It still cracks me up that I’m walking to the store (a mile away) in the middle of November in just a hoodie.  People from the midwest and other cold states will understand…that’s unheard of back there.  By November you’re bundled up in layers, winter coat, boots, hats, mittens, scarves and you avoid walking anywhere if you can.

I just love the weather here.  Our town is on the edge of the foothills so if you drive north in town you start to go up.  We had school canceled 5 times last year because of snow up in the hills.  It rarely reaches down to the main part of town, though.  When we were driving home from Vancouver on Saturday we could see the highest hills around town were just covered in snow.  You could tell it had just fallen because everything was just white.  Mt. Hood has been dumped on.  We couldn’t see the peak but the rest of the mountain is completely white as are all the hills surrounding it.  Very pretty to see.  We just get rain.  But, luckily, it’s not a hard rain, just a yucky drizzle.

And then in the summer when everyone is dying of heat stroke it’s a pleasant 75F with no humidity here.  Except last summer when we had a horrible heat wave from the beginning of August until mid-Septemeber.  Weeks and weeks of upper 80s/low 90s which probably doesn’t sound like much to everyone out east or in the desert but we don’t have AC so it SUCKS.  Especially when we had days in a row where it was pushing 100F.  There’s nothing to do but sit under the fan drinking ice water and hoping it will pass.  But that was kind of a fluke (according to long time residents).

Ahh, the weather, boring small talk question number 1.
The weather here in Chicago has been kind of screwy lately. I remember summers being long, hot and humid. Most of our days were spent in the pool and our nights ended on our front porch catching lightening bugs.
So far this summer we’ve ran the AC just 4 times. On June 30 our high was like 62! It rained all day on the 4th of July and was cool enough the kids had to have sweatshirts on to play outside.

Today is more of the same.  It’s 71 and raining.  The kids are driving me nuts because they are cooped up in the house.  It’s not bad enough that they are cooped up for the 6 months that we have winter but now there is nothing to do in the summer either.

Here is one of my favorite layouts.  Back in my graphic phase.  I love the clean look of it.  I think this was for a challenge to do a layout for each season.  This was my spring layout.  Most people think flowers and pastels and Easter for spring but spring that year (in 2006) was just wet and icky and gray for us.  There were no pastels.  It rained for 2 weeks straight after Mother’s Day.  Easter wasn’t much better. 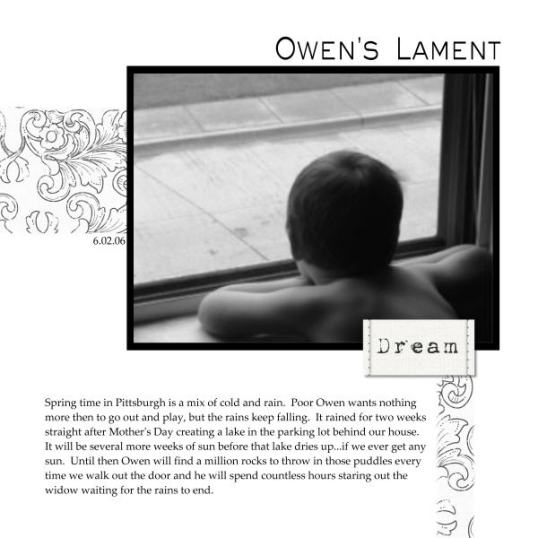 (The black outline is just so you can see the border).